David has grappled with more challenges in his young life than most of us ever will. But in a little over 12 months, he’s bravely made his way from sleeping rough to living independently.

“Before Windsor House no-one would take me on and at that point I wasn’t doing very well. I lost all my teenage years and I can’t go back… but now the future is looking bright.”

David has grappled with more challenges in his young life than most of us ever will. The-18-year-old has been arrested, spent two-and-half years in a mental health unit and even longer on the streets. But in a little over 12 months, he’s bravely made his way from sleeping rough to living independently.

At just 13, David began to show the very first signs of a serious mental illness though he didn’t realise what it was.

“I had no clue what was going on… I was arrested for breaking into cars. It wasn’t to steal anything… but to smash the GPS trackers; I thought that’s the way people were contacting me and it was very real in my head,” David said.

“The police arrested me and locked me up and then I went to a mental health ward.”

David was eventually diagnosed with schizophrenia and was admitted to hospital. “I ended up staying longer in the mental health ward than I needed to because I had nowhere to go.”

For David, returning to his family home wasn’t an option. At 16, he was released from hospital but with no support and nowhere to live, he found himself at loose ends.

“I couldn’t go home but I couldn’t dwell on it; I had to find somewhere to go,” David said.

He eventually found his way to BYS, arriving at its Windsor House accommodation with no clothes, belongings, food or Identification.

“Once you get all those things, there are so many other things you can get into place that you couldn’t before because of those obstacles. Windsor(House) took me on and that meant a lot because absolutely no-one else would; they helped me get all those things sorted.

“I still struggle, even with meds you don’t have perfect days every day but I deal with it. I’ve learnt how to manage it (schizophrenia) but it doesn’t go away.

“I’m about to start a course and soon I will be getting my own unit because Windsor took a chance on me. If it wasn’t for BYS, I literally wouldn’t be here right now. I don’t know where I’d be.” 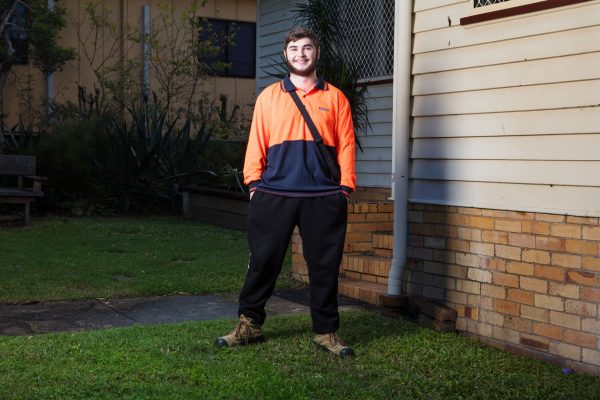 If it wasn’t for BYS, I literally wouldn’t be here right now. I don’t know where I’d be